The SAAB 340B is a passenger/military transport plane, first flown in 1983. As a military aircraft, it is most often used with the Ericsson Earieye radar. I am, however, planning to model this as a passenger plane in Nok Air livery. Directly from Sweden, I bring you…….. THE 3-VIEW 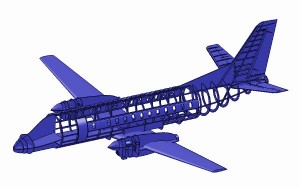 The picture shows the progress so far.  I am getting close to completing this design. Some work still needs to be done with the nose, the engine nacelles, and landing gear.

I have updated the elevator design. I was afraid that the old design was structurally too weak. The elevator is almost 70 cm wide and requires sufficient strength. I have used a design similar to that used by David P. Andersen in his Arado. 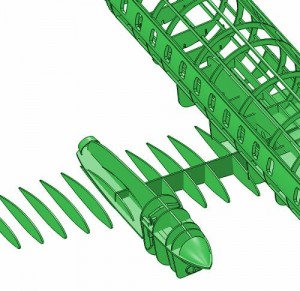 For now, I have decided to use a plywood spar for the centre section. This will give a strong centre section that can be bolted on to the main fuselage. The protrusion on the real aircraft will be part of the wing centre section, and there will be a piece missing in the fuselage where this can bolt onto. I will have to find a clever way to cover up the parting line between the fuse and the wing centre section, so that it will not be visible. Hopefully the colourful paint scheme used by Nok Mini will help conceal it.

The other decision I have taken is that the engines and their nacelles will also be part of the centre section. The entire centre section will be one strong assembly with engines, landing gear, and petrol tanks. The whole she-bang can be bolted on to the fuselage in one piece. 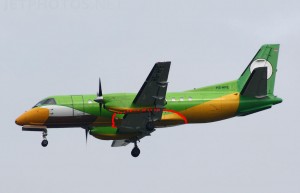 The only real drawback, is that the aircraft with the outer wing panels removed will have a width of about 75 cm and each outer wing panel about 70 cm each. Not exactly ideal. I have worked all day on the SAAB 340B centre section. As discussed in my previous post, the wing centre section will contain the two nacelles, and will be detachable from the fuselage. I solved the problem with the wing being angled at 6.5 degrees too.

Interestingly enough, part of the aircraft cabin floor will have to be built directly on top of this section.

Another thought I had was to build the wing/fuselage cover out of fibreglass and use it to hide the R/C receivers etc. Another way would be to keep the R/C equipment behind the cabin door. Let’s see how it goes.

I am worried about the strength of the centre section, as all the force from the engines will be distributed to the rest of the aircraft through it. I think I need to beef up this area a bit. Hopefully, if I let the wing attachment tubes go straight through the nacelles, that will help with the structural strength as well.

This airplane is a twin-engine and for reliability reasons, I will be using electric brushless motors. 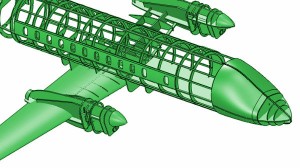 The last update on this aircraft was several months ago, and during that period, I have learned a lot of new skills, like keeping the cockpit in one piece, and using lofting for the wings. I have started updating the SAAB 340B design, to make it easier to complete. The first change was the cockpit area.