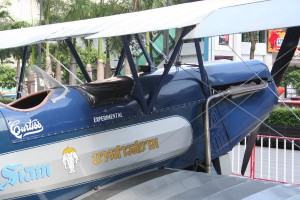 Walter Beech, Clyde Cessna and Lloyd Stearman were all involved in the design and production of the Travel Air 2000, which obviously resulted in a great-flying aircraft.

The Travel Air 2000 started live in 1925 as the Travel Air B but changed name 3 years later to Travel Air 2000. It soon became popular and by 1930 when production stopped, more than 1550 were built. The aircraft took over from the now aging Curtiss Jenny, and, with the V8 Curtiss OX-5 engine, was one of the most reliable aircraft of its time.

The aircraft was used by bush pilots, barn stormers and general aviation as well. Many Travel Air 2000’s are still flying to this day. 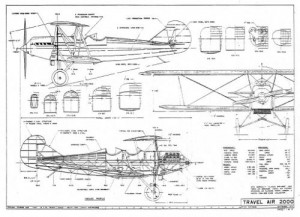 This is the 3-view I will be using. It is nice and detailed, just as I like it.

First step was to stretch and scale the 3-views. They needed to be stretched a bit due distortion during photocopying and scanning and what have you.

This airplane consists of a fuselage with a square cross-section with wooden stringers and a turtle-deck to give it a bit of aerodynamic shape, and is fairly straightforward to draw.

I then drew the fuselage frame. This was originally in steel tubing, but I will use spruce for the model. The spruce will be rounded at the fuselage area, as it is possible to see it through the open cockpit.

The original aircraft made use of bracing wires to strengthen the fuselage. I will do the same. More on this later. 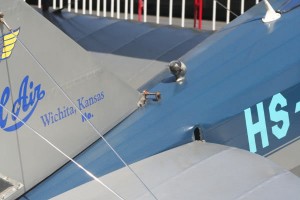 The drawing of the turtle deck is not too clear. Luckily I have lots of photos of this airplane, and it soon became clear what the shape was like. There are 7 longerons in the turtle deck, and it has an elliptical shape at the front, and flat at the back.

I have tried to get the right shape for the turtle deck, but it just doesn’t look right.  I’m not sure what the problem is, and I am having trouble getting the angles right. This is, unfortunately, what sometimes happen – It looked like it was going to be dead easy, and then it just doesn’t work out that way.