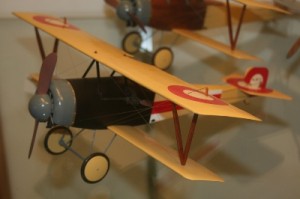 The Type Aa (Now Danish “Å”) fighter aircraft was the first aircraft manufactured by Nielsen and Winther – a large machine shop in Copenhagen at the time. Six were sold to the Danish Army,  but three later crashed, and the remaining planes were then banned from flying.

Although this plane was the first indigenous aircraft in the danish army, it has come to light that at least some of the drawings were from the Thulin factory in Sweden. In fact, some of the plans I have seen, were marked named the Thulin ‘L’  aircraft. Although N&W may have received technical assistance from abroad, it was built in Denmark and used by the Royal Danish Army, and as such, deserves to be modelled.

I now have a good set of drawings, so the modelling can start soon. The picture shows the colour-scheme I have decided on.

I have taken a lot of pictures of this aircraft. While at the museum where it lives, a volunteer showed me the details of the rotary engine. Thank you, it was very interesting. He also claimed that the Nielsen & Winther Type Aa is a clone of the Nieuport 17. I have not looked into that claim any further, but it looks at least partially correct. Comparing the two, the fuselage looks similar, but the engine cowl definitely does not. 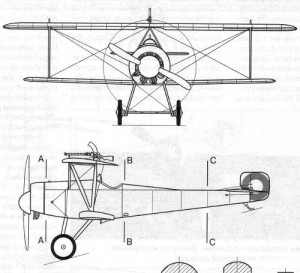 The model will be to scale 1:5, giving the model the dimensions:

So it’s not a big aircraft.