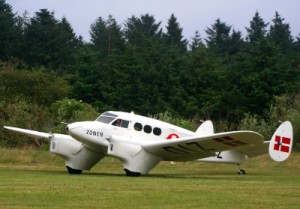 The Skandinavisk Aero Industri, KZ-IV is an ambulance plane used after WWII in Denmark.

The aircraft was designed and build during the war, and materials were scarse. It is constructed entirely out of wood.

The plane has a really large wingspan, compared to the fuselage length, because it had to be able to land on really short landing-strips, and, more importantly, because  high-power engines were hard to find during the war.

Only two planes were built, the OY-DIZ and OY-DZU. The main differences between the two are: Horizontal Rudder covering (fabric/plywood), Window in door on OY-DIZ, size of slats.

For a full description of this remarkable aircraft, see the Skandinavisk Aero Industry History, in the Aviation Section. 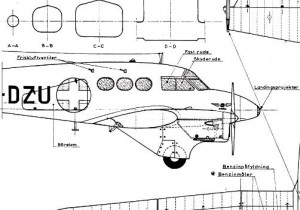 The 3-view was acquired. The 3-View is for the KZ-DZU, the first aircraft build. At a scale of 1:5, the model size is:

This aircract was STOL, and it has a HUGE wingspan to get sufficient lift.

I have had an inquiry from the chairman of Dansk Veteranflyklub (Danish Vintage Aircraft Club). He asked me to do a write-up about myself and the SAI KZ aircraft, so I better get this model completed.

First up is the wing. It’s amazing how thick the wing of this aircraft actually is.