The MiG-8 Utka was a very unconventional aircraft, designed and built by Mikuyan i Gurevich to test the concept of swept wings, later used on the MiG-15 jet fighter. The plane was made from wood and fabric, and had several different rudder and wing-tip configurations. It was later used as tour/transport plane by the staff at the MiG design bureau.

This is one of the build-threads lost in the server crash. The picture shows how far I am. Main parts missing are the rudders, empenage, and ailerons. The fuselage is more or less complete.

This is the 3-View I am working from. It is one I found on a Russian website. The outline is pretty accurate, but there are not many surface details.

This is the status as of today. 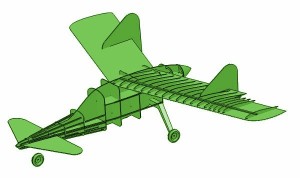 It obviously needs some work, mostly on the wings and the canard.

I have uploaded a video showing the MiG-8 Utka in flight. To a modeller, there are many important details that can be gleaned from this video.

Note that the configuration in the video has leading edge slats.