The Focke-Wulf Fw-200 was developed before WWII as a long-range passenger airliner. It was built to the specifications of Deutsche Lufthansa, and was developed by Kurt Tank. It first flew in 1937. It was an all-metal, four-engined monoplane capable of carrying 25 passengers up to 3,000 km. The Fw-200 was purchaced by Det Danske Luftfartsselskab (Danish Airlines) and was used for passenger transport by DDL well into the war.

The Fw-200 was the first aircraft to perform a non-stop flight across the Atlantic, from Berlin to New York, causing quite a stir in the USA, and a lot of pride in Germany. The trip took place on the 10th of August 1938, and took approximately 24 hours. The return trip took less than 19 hours.

The German Fw-200’s were modified for war-time use, and was particularly successful over the atlantic for maritime partols and anti-submarine work. The war-time modifications were installation of gondolas and machine-guns, as well as radar.

Hitler had a Fw-200 converted from airliner status to personal aircraft. It was marked D-2600 and named Immelman III, in honour of WWI flying ace Max Immelmann.

After the war, a large number of surplus Boeing DC-3’s at knock-down prices, meant that the otherwise superior Focke-Wulf Fw-200 didn’t stand a chance.  However, the Focke-Wulf Fw-200 was so far ahead of its time that, had it not been for the war, Focke-Wulf might have been one of the most popular airliner manufacturer today.

A single Fw-200 was raised from a lake in Norway in the 1990’s and is being restored in Berlin. 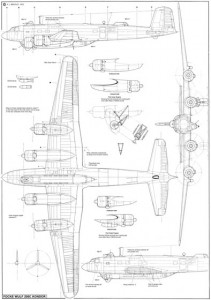 The best 3-view in the world of this aircraft was drawn by genius Arthur L. Bentley in the UK in 1975. They are still available directly from Arthur at his web-site here. If you are serious about the Fw-200, you MUST get a copy of these drawings.

I will be using these drawings as the basis for my model.

I will be receiving flight manuals and technical documentation from a source in Germany soon. When they arrive, I will be able to start designing a model of this amazing aircraft. I have loaded the 3-views into the CAD software and made a simple model using the side-, top and front views. This is just to see that all the 3-view drawings are consistent, when it comes to dimensions. Also, I will “glue” the fuselage formers to the model.

Even with just the outline traced, the sleek aerodynamic lines of this aircraft are clearly visible. 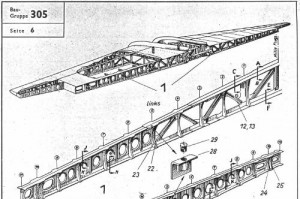 I finally received spare parts catalogs, technical manuals and pilots notes for this aircraft from Germany. There are almost 2500 pages, and really useful, both when it comes to designing, and, in particular, the detailing of the model.

I have started working with world-renowned aviation artist Juanita Franzi on the FW-200 Condor. Juanita has been illustrating numerous aviation books and magazines.

I am very excited to be able to share information and ideas about this great aircraft with her.

Do check out her amazing art at: www.aeroillustations.com. It is well worth a visit.

I have started lofting the fuselage. It’s boring work, and all the little imperfections in the 3-views show up here, so after the lofting, there will be some cleaning up to do.

Is it just me, or does the nose cone in my 3-view look different from the nose cone used on the commercial FW-200 shown in the photo in the top post?

The fuselage has now been cleaned up and lofted (with the exception of the last fuselage station). It really looks great. I can’t wait to get this aircraft in the air. 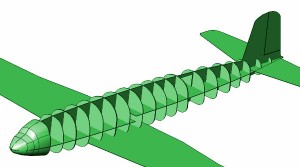 The last piece of the fuselage was lofted, and the formers were cut out. The formers are located where there are no windows and doors. The fuselage longerons are done. Nothing special to remark here. The book about the FW-200 Condor that I supplied technical information to, is now available. Whether you are interested in the Danish Airlines or not, this book is full of amazingly detailed photos of the Focke-Wulf Fw-200.You can acquire the book at Rob Mulder’s website: europeanairlines.no In the book mentioned in the post above, about the Fw-200 Condor, I found this interesting photo, showing why the cockpit shape was so difficult to grasp. It looked different from practically every angle. Now I know why.