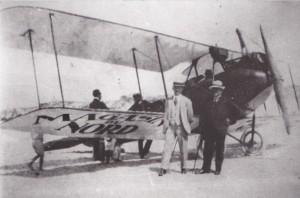 The first early aircraft were crowd-pullers. People stopped and stared at the sky every time an aircraft flew over head. Pilots visited towns all over the country, like in 1911 when the Berg & Storm aircraft flew near Frederikshavn.

After the great war, aviation had advanced to a point where aircraft were fast and reliable. Aerial advertising in Denmark started immediately after, when Magasin du Nord, the leading shop in Copenhagen, got Dansk Luft Rederi to paint their LVG Rumpler aircraft in Magasin livery.

Politiken paid Dansk Luft Rederi to fly around, on new year’s eve 1919-1920, with a giant banner painted with the word “Politiken” attached to the lower wings of their LVG Rumpler (Politiken is a Danish newspaper). 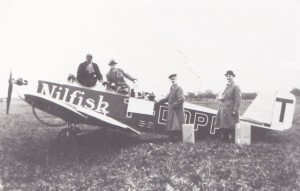 The company Nielsen og Fisker, the manufacturer of the Nilfisk brand of vacuum cleaners, and “Nimbus” motorcycles also made use of aerial advertisements. They paid the owner of T-DOPF to write their name on their Klemm aircraft.

The magazine “Ude og Hjemme” went as far as purchasing their own deHavilland DH-60X Moth aircraft for advertisements purposes during the 1940s and 50s.

Skandinavisk Aero Industri made a proposal to Politiken during 1950 for the construction of KZ-Reklame. An aircraft with a scrolling light display on the underside of its flat wing.

Aerial Advertising started to fade with the advent of the electronic medias. The second Danish TV station,  TV2, started broadcasting commercials during the late 1980’s and was the final blow to aerial advertising in Denmark.

The last real aerial advertising campaign, was advertising “Tre-Stjernet” Salami. A Cessna 172 was used to pull a huge yellow banner with the Three Star logo.

A publicity stunt was attempted by the Royal Danish Postal Service, when a Cessna 172 was likewise used to promote the four stamps commemorating Kramme og Zeuthen during 2006.