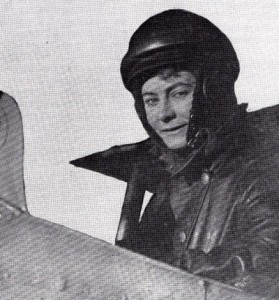 Emilie Sannom was born on the 29th of September 1886 and grew up in Florida, USA, where her father, Fritz Sannom, a Danish sailor, was trying his luck at farming oranges. When the family had to return to Denmark, they settled in Stefansgade, near Nørrebro in Copenhagen.

Emilie got a few roles at travelling theatres, but it was the new media, motion picture, that interested her. Her quick wits and good looks, soon got her her first role as a dare-devil. That was in 1910. She stared in at least 15 movies, in a genre called “Sensational Movies”. The movies had titles like “Rædslernes Hule” (Cave of Terror) and “Skarpretterens Søn” (“The Executioner’s Son”). Her stunts included jumping out of hotel windows, being tied to burning wings on a windmill, and laying helpless between the railroad tracks in front of a speeding train.

World War I put a stop to the Sensational Movies genre. People had had enough of violence. People wanted romance. Something Emilie didn’t aspire to.

Emilie found her next challenge on a trip to Italy with Alfred Lind, the film-maker. A bet worth 100 Lire, got Emilie up in the air for the first time. She was sitting under the aircraft, on the landing gear, sideways, with the back against one of the struts and with her legs in the air. Apparently, the landing gear reminded her of a trapeze, and she started performing tricks on it. Soon after she was hanging in one leg, laughing and waving at the onlookers on the ground, as the plane flew at low altitude along the runway. 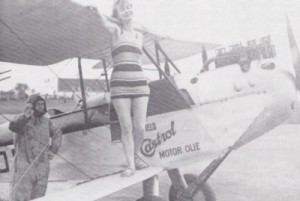 She made two movies while in Italy that year, titled “Luftens Herskerinde” (“Conqueress of the Air”) and “Cirkus Wolfsons Sidste Gallaforestilling” (Circus Wolfson’s last Show”).

Back in Denmark, Emilie spent much time at Kløvermarken Aerodrome, south of Copenhagen. It was a time with lots of fun and lots of champagne parties. She was on one occasion climbing around a Royal Danish Army L.V.G. Rumpler aircraft over Copenhagen.

She soon toured Denmark together with flight-instructor H.I.M. Jensen, performing stunts in Jensen’s deHavilland Gipsy Moth. They would fly to a small down on Saturday, and perform stunts on the following Sunday. She would perform all her stunts, and then end the show by jumping out of the plane in a parachute. Jensen would then perform some manoeuvres. He is said to have made 60 consecutive loops at one show.

Emilie died on the 30th of August 1931, on a field outside Grenå. Her partner was pilot Knud Clausen-Kaas in an orange AVRO 504K aeroplane. She had borrowed Clauson-Kaas’ private parachute, while he had borrowed a parachute from the Army for himself. Both had been packed by an expert.

Her own parachute had been opened by accident by a helper on the ground before the flight. Clausen-Kaas refused to re-pack the parachute and Emilie was crying. She borrows the army parachute instead, and Clausen-Kaas took off with out a parachute. The handle that opens the parachute was tied to the aeroplane with a 10 m long wire, to ensure it would always open. The parachute also has a manual handle.

After climbing around on the aircraft, she jumped from an altitude of 600 m. As she jumped, Clausen-Kaas felt a hard pull in the aircraft. The 10 m long wire had broken. Emilie was plummeting through the air. Kaas screamed “Pull the chord, Mille!” but nothing happened. Was she panic stricken? Was she unable to find the handle? We never know. She hit the ground at high speed and was dead upon impact. 10,000 on-lookers fled in all directions.

A trial was conducted, but it was deemed an accident. Clausen-Kaas was fined 200 Kroner, because he had lent her the parachute –  Army property.

Emilie Sannom is burried in Assistents Kirkegård (Assistent’s Graveyard), not far from Stefansgade where she had lived most of her life.

A poem was written in her memory by Tom Kristensen, a famous Danish poet: “Life is cheap my friend. Bravery has no value”.