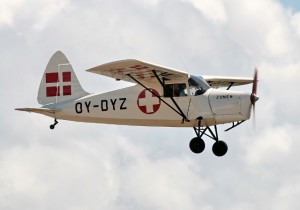 This is my first Danish scale model. I have been collecting information on this airplane since 2006.

This was one of the most popular Skandinavisk Aero Industri aircrafts, and many are still flying.

You can read more about this plane in my Skandinavisk Aero Industri section here. 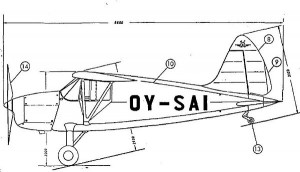 The 3-view originated from the original type-drawing from Skandinavisk Aero Industri. As such, the outline is accurate, but there are very few details. With a bit of lofting, it should be possible to get the correct shape. 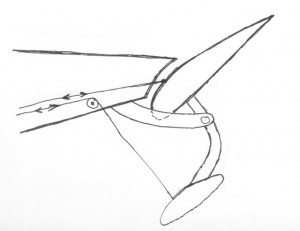 The KZ-III was designed to be a low-cost design able to take off and land on very short grass runways. As a result, some very clever design trade-offs were considered during the design phase. The final design is unique for a plane of this type, combining low cost, ease of use and still able to achieve the requirements. A solution every engineer must admire as being “elegant”.

The KZ-III wing is a “candy-bar” design using the NACA 23012 airfoil. However, the short run-way requirement means that the wing was designed with leading edge slats and ailerons that double up as flaps. Clever design trade-offs resulted in both lower complexity as well as lower cost. Under normal flight, these “flaperons” move 19 degrees up and 19 degrees down, and with the flaperons in the maximum “flap” position at 40 degrees down, they were still able to move 19 degrees up and down.

Fowler flaps would have been ideal, but way too complex and expensive to manufacture. Instead the designers came up with an off-set hinge with counter-weights, and an ingenious mounting of the control-cables. The drawback is slots cut in the flaperons to allow the hinges to move freely. Establishing the correct cable attachment points on the hinges must have been a real pain too. This is a solution so unique that I have never seen it on any other aircraft.

I have illustrated the hinge system in the attached drawings. 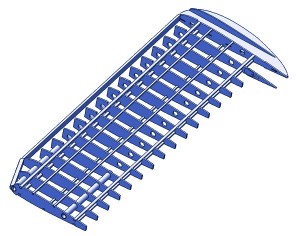 The wing in progress. I’ve stopped, since close-up pictures of the ailerons and hinges are required. The leading-edge slats are not done yet. 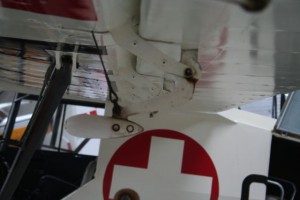 Took a drive to look at a real KZ-III. Here is the hinge, in detail. Note the slot in the aileron, that the hinge goes through.