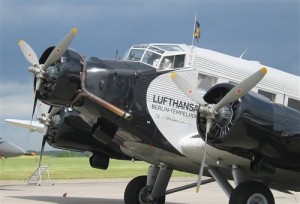 The Junkers Ju-52/3m is well-known to most airplane enthusiasts. It was used as a transport aircraft during WWII by the Germans. Hitler also had one at his disposal when flying around the Reich. Several are still flying today.

Because of the corrugated iron sheeting, this otherwise popular aircraft is extremely difficult to model. In this thread, I will first concentrate on modelling the corrugation, before the actual design can begin.

I was very lucky last week, meeting an elderly Spanish gentleman who used to be a paratrooper, but who was now restoring the Junkers Ju-52/3m that he used to parachute out of. He invited me to see the restoration project, and I have loads of photos of the airplane, both inside and outside. The aircraft had two gun turrets and a bomb bay! The biggest impression, however, was how thin the corrugated aluminium skin really is. My guesstimate would be 0.8mm (1/32″). Anyway, it was a privilege talking to this man, and hearing about the aircraft and his life as a paratrooper after the war. Great stuff!