As WWII was approaching, Denmark’s air defences were based on outdated biplanes like the Hawker Nimrod. Despite of the Labour government cutting funding to the military, there were some developments. First and foremost, Denmark bought the rights from Fokker, to build the G1 Twin-Boom fuselage heavy fighter. Orders were also about to be signed for the Macchi M.200 fighter. The Danish government also showed interest in the Heinkel He-114, but that didn’t work out, for the obvious reason. However, licenses had been acquired for production of the Fairey p. 4/34, as well as the Fokker D.XXI. Both were under construction when the Germans invaded.

However, people at Orlogsværftet (Naval Dockyard) had, in all secrecy, started the design of an indigenous all-metal monocoque fighter aircraft named the J.1 Jager. The initiative came too late, and the J.1 Jager aircraft was never built. Some of the drawings survive, and I should get hold of them by next month. For more information about this amazing aircraft and it’s history, look here.

I have got the J1 drawings. They are not much more than a set of 3-views, with very few external details. Since the design of this aircraft was stopped due to the German invasion in 1940, the design is not complete. However, the engineers managed to make some calculations as well as the landing gear and the controls before they were forced to stop. There is definitely enough to make a model, but details regarding engine cooling, exhaust, aileron hinges etc. will have to be an educated guess.  Like the original, I will make two set of wings, one for bombing, and one for the fighter configuration. 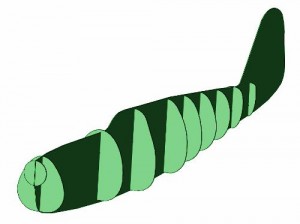 I have started on the fuselage formers. There are a few problems, mainly due to the distorted photos of the original drawings. Here is what I have so far. There are obviously some formers missing, and some are a bit wonky, but I will get there, eventually.