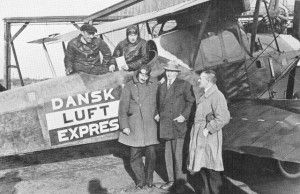 Herr Sablatnig, the well-known German aircraft constructor, and the owner of Sablatnig Flugzeugbau GmbH, visited Kløvermarken in 1919. He brought several small machines with him. These machines were originally build for night bombing, and had been re-fitted as passenger aircraft, after the Treaty of Versailles had banned all military aircraft production in Germany.

One of these aircraft, the Sablatnig P.I was especially impressive, as it could carry four passengers in an enclosed cabin. This was the first closed-cabin aircraft to visit Denmark. The machine was small, cramped, uncomfortable, and basically consisted of a “lid” over some upholstered pillows. The pilot was sitting in an open cockpit behind the passenger cabin. Access to the cabin was through the “lid”. However, it was nevertheless a closed-cabin machine.

Dansk Luftekspress was incorporated in 1919 based on these Sablatnig PI machines. The company started carrying passengers around the Danish provinces with two Germans as pilots. The company was not very active, and was eventually dissolved. 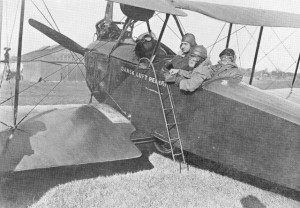 Denmark was visited by many German pilots and aircraft constructors immediately after 1918, including Hermann Goring and Anthony Fokker, as well as a couple of English and French aviators.

A Mr. Henrik Tholstrup, bought several containers of old German planes and spares, which arrived during the summer of 1919. The company started in September 1919, with three L.V.G.s, two Fokker D.VII, and later also two Rumpler C.Is.

Dansk Luft Rederi was a pioneer in Danish aviation and their constant promotion of aviation had a great impact on flying in Denmark.

A borrowed French Goliath aircraft was used to take paying passengers up, and the company’s German mechanic performed wing-walking as well as hanging in a rope-ladder suspended from a L.V.G.’s landing gear. Aerobatics were performed with a Fokker D.VII. Surely a magnificent sight.

A movie called “Gudebilledet” was made with the Swedish Heart-Throb Gösta Ekman (Senior) in the leading role. An aerial dog-fight between the company’s L.V.G. and their Fokker D.VII was filmed.

The company also flew on new year’s eve 1919-1920 with a giant banner painted with the word “Politiken” attached to the lower wings  (Politiken is a Danish newspaper).

The actual passenger flying started in ernest in spring 1920, between their base in Lundtofte, and many provincial towns. The route between Lundtofte and the North-Sealand beaches were a favourite route. 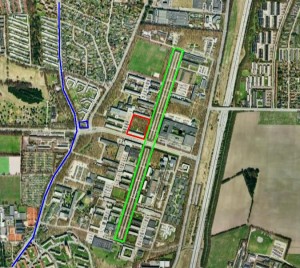 A hangar fire on 18th of June 1949 triggered the closure of the Lundtofte Aerodrome. Danmarks Tekniske Universitet was built on the site. Here is a map from Google Earth. No prize for guessing where the runway was. If you click on the photo to enlarge it, you can see a red box showing the location of the administration and training building and the two hangars. The blue line is the highway, the blue box the entrance and the green box the airfield.

The “Nordisk Luft Trafik” company was started by Mr. Bendt Rom on the 6th of December 1919 and was situated at the aerodrome in Glostrup. The company’s only machine was the D.F.W. brought to Denmark by Hauptmann Hermann Göring during his visit to the Scandinavian Airoplane Exhibition (Skandinavisk Flyveudstilling) in 1919.

The company started arranging passenger transport around the country, but only managed to get a single flight. The poor result was contributed to the pilot who disappeared for 14 days on his way to Rødby. The machine was parked in Rødby until it fell apart. Dansk Luft Transport was founded in 1925 as a direct competitor to the state-owned Det Danske Luftfartsselskab. It was sponsored by the German aircraft manufacturer Junkers, who tried to standardize on a single aircraft for the entire Europe. The company had two Junkers F13 aircrafts and flew daily on the route Copenhagen-Berlin-Dresden. 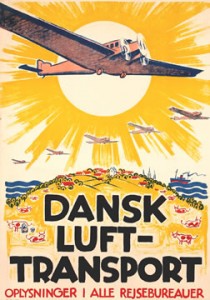 First time in a Fokker D.VII and later with a D.F.W. He was involved in an accident while in Denmark. A seagull flew into, and destroyed, the propeller on his D.F.W. after which he had to emergency land.

The D.F.W. he brought to Denmark was sold the the company “Nordisk Lufttrafik”.

Was Hermann Görings machine a DFW C.V? If you have more information (or a photo) of this aircraft, please leave a message.