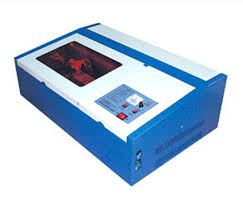 Let me make it absolutely clear: The Chinese laser cutters from ebay are crap. Everything about them screams shitty construction- From the electronics, to the end-stops made of garden hose, to the aquarium water pump . They do have one (and one only) redeeming feature: They are cheap.

I bought one last year, despite loads of reviews saying that the software that came with it was rubbish. If I had know just HOW rubbish it is, I would not have bought it. t is easily the worst piece of software I have ever used. The software developer has tried to cram a million features into the software, before fixing the bugs in the previous version. The result: A program that can’t even do the most basic functions.

As my first attempt, I tried to cutting my name in a piece of acrylic. The laser started out, and half-way through the ‘e’ it decided to cut a straight from the middle of the letter and directly into the right side of the laser. Why the developer has even bothered copy-protected this piece of crap with an USB dongle is beyond me.

So, I will have to change all the electronics, and use a proper piece of CNC software.